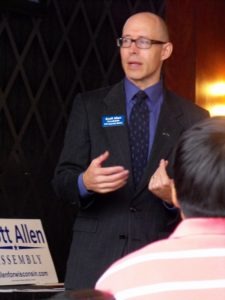 Scott Allen maintained a comfortable lead throughout the night in the 97th Assembly District race.

But his victory wasn’t official until just after midnight Wednesday morning, more than four hours after the polls closed.

With 2,003 votes or 34 percent of the vote, Allen separated himself from the pack to win the crowded six-person Republican primary.

His closest challenger was Humana consultant Brandon Rosner, who finished with 1,714 votes or 29 percent of the vote.

All of the candidates were city or town of Waukesha residents.

Allen, a former city of Waukesha alderman, will appear on the general election ballot in November.

But with no Democratic challenger, Allen essentially became the district’s new state representative after winning the primary.